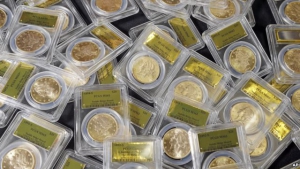 The Reserve Bank of Zimbabwe has rolled out special coins designed to ease change problems that have been faced by members of the public in the country since the introduction of multiple currencies in 2009.

According to the Chinese news agency, Xinhua and the Consumer Council of Zimbabwe (CCZ), the central bank on Wednesday evening unveiled the coins minted in South Africa, to some stakeholders including consumer groups, retailers and various entities.

CCZ director Rosemary Siyachitema says the RBZ has indicated that the special coins that are indexed at par with the United States coins, will be distributed in the country soon.

Siyachitema said the coins, printed at a cost of $50 million, are expected to be warmly welcomed by members of the public.

RBZ officials were not available for comment as they were said to be busy engaging various stakeholders on the use of the coins.

Economist Godfrey Kanyenze of the Labour and Economic Development Research Institute of Zimbabwe says the rolling out of the coins was long overdue.